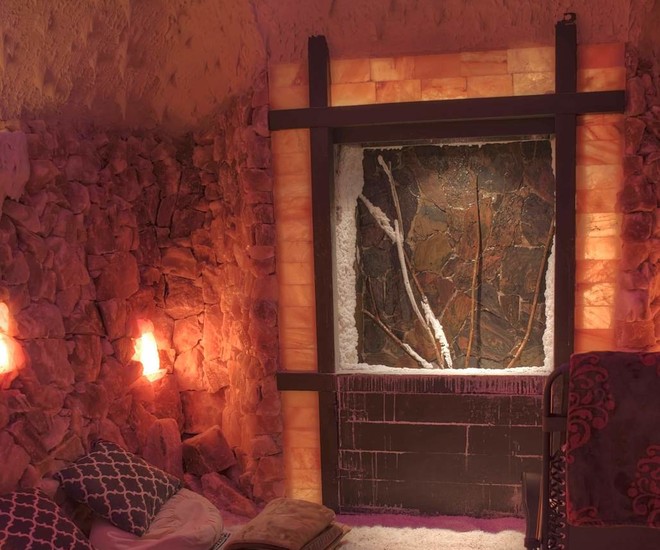 Last year I had the opportunity to visit a unique Himalayan salt cave tucked away in an out-of-the-way part of western New York just over the border from upstate Pennsylvania.   Far from Tibet, my visit to this cave was one of the highlights of my east coast experience.  Known as Halotherapy, it touts a multitude of benefits from alleviating respiratory ailments to treating fatigue, detoxification, lifting brain fog and improving energy levels by restoring ionic balance upset by electro-magnetic pollution, lessening anxiety, reducing stress, treating depression, even skin repair and regeneration.  This man made cave, constructed of 20 tons of Tibetan salt, is not one-of-a-kind but part of a new trend sweeping the globe as salt caves become increasingly vogue.

At the very least, it sounded like an interesting experience as we found ourselves thousands of miles from our island home and sorely missing the salt of our beloved Mother Ocean.  As my husband and I were escorted in to the threshold of the cave, we immediately felt the calming effects imbued by soft sounds of nature coupled with an Asian inspired trickling water feature inset in to the interior of the cave wall.  The cave floor was a spongy display of small salt crystals that felt like a symphony of smooth gems massaging the underside of the feet.   With every breath, the air reflected the lightness of a gentle sea breeze.  As we reclined back on to a blanket and a host of cozy pillows, we were entranced by the soft lighting emanating from mystical salt stalactites that hung from the ceiling; an interwoven web of ethereal lights cycled in frequencies, vibrations and colors targeting the chakra system.  This therapy, more commonly known as Chromotherapy, was especially intriguing as we were almost instantly transported in to a world of intimate tranquility.   With our minds quickly falling quiet and our bodies melting in an abyss of negative ions,  we relaxed in to an oblivion of sublime sensation where we remained for the better part of an hour. 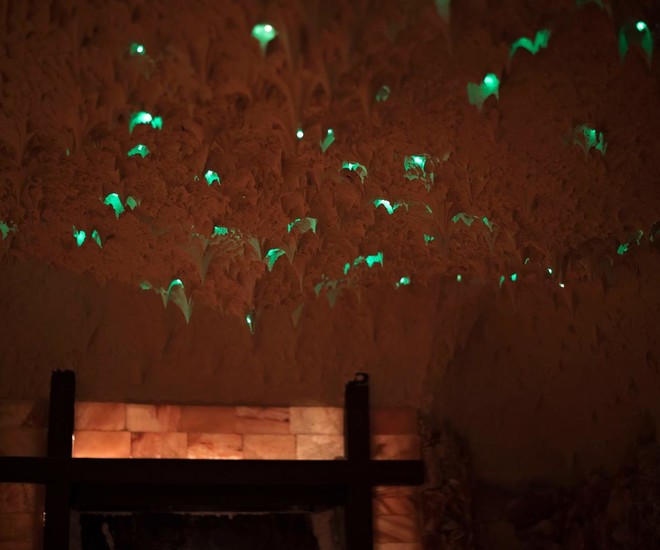 Polish builders designed and constructed the cave, replicating and embellishing authentic salt caves commonly found throughout Estonia, Germany, Pakistan and Poland.   All natural, anti-microbial and anti-inflammatory, the restorative healing powers of such caves do not go unnoticed.  Not falling short, it delivered what it promised; at the very least it was soulfully satisfying.   I  recommend a visit to one of the many caves found around the country, if for nothing other than the novelty of it.   Knowing the remedial qualities of the ocean, it would not surprise me if the therapeutic benefits of such salt immersions still have yet to be discovered.  I might only imagine the healing potential of multiple visits.

While many spas are building simple salt rooms as places to relax and enjoy, many facilities have both rooms and caves offering a host of other services from foot baths to full body massages and energy balancing or Reiki treatments to healing sound baths.  On the Big Island of Hawaii, the Ho’ola Spa at the Sheraton Resort in Keauhou is one such destination that might be worth a visit.   While a salt room, not a cave, the effects of Halotherapy still might be enjoyed as guests recline in front of an immense wall of ancient sea salt in a comfortable spa-like atmosphere.  For a more uncommon adventure, you might entertain scouting out etheric salt caves, whether man made or Nature made, on your next trip or get-a-way.  I know I will.

To find salt rooms or salt caves around the United States, click here.

May the genius of man always create wonder
from the inspiration of the natural world
while preserving its birthplace.

« A Portal for Grace
High Vibes »

Did you find this article helpful? Share it to social networks by clicking on an icon below.

To Do or To Be